skip to main | skip to sidebar

Grace Boggs is an internationally respected scholar/activist who has been active in the struggle for many years. She was married to auto worker and activist James (Jimmy) Boggs. James was also a well-respected activist/author. Racism and the Class Struggle: Further Pages from a Black Worker’s Notebook. Her thoughts appear below. She posted this late February and early March. RGN

Born in , of Chinese immigrant parents in 1915, Grace received her B.A. from in 1935 and her Ph.D. in Philosophy from in 1940. In the 1940s and 1950s she worked with West Indian Marxist historian C.L.R.James and in 1953 she came to where she married James Boggs, African American labor activist, writer and strategist. Working together in grassroots groups and projects, they were partners for over 40 years until James death in July 1993. Their book, Revolution and Evolution in the Twentieth Century, was published by Monthly Review Press in 1974.

In 1992, with James Boggs, Shea Howell and others, she founded SUMMER, a multicultural, intergenerational youth program to rebuild, redefine and respirit from the ground up, which completed its 14th season in the summer of 2006. Currently she works with the of Hope campaign and the Beloved Communities Initiative and writes for the weekly Michigan Citizen.

Her autobiography, Living for Change, published by the of in March 1998 is widely used in university classes in Asian American studies, on and on social movements.

For her contributions, she has received numerous awards.

My eyes and ears are riveted to TV. I can’t get enough of Obama’s calling upon Americans of all ages, all walks of life, all faiths, all abilities, all sexual orientations, all political leanings, to stop thinking like victims and start believing that we have the power within ourselves to create the world anew.

Obama is providing the authentic, visionary leadership we need in this period when our challenges are so great and our politics (as he puts it in The Audacity of Hope) so small.

That kind of leadership is very precious.

26 year-old MLK provided it in 1955 when he inspired blacks, sick and tired of being sick and tired, to go beyond protest and manifest a more advanced humanity in their yearlong non-violent boycott.

Jimmy Boggs anticipated it when he said in his last speech to students in 1991 “I don’t believe nobody can run this country better than me. I’m saying you better think that way. You need to stop thinking of yourself as a minority because thinking like a minority means you’re thinking like an underling. Everyone is capable of going beyond where they are.”

Liberals and radicals tend to be skeptical of this kind of leadership. Viewing society as a laundry list of problems, liberals promise solutions. Radicals, having concluded that another world is necessary, begin to lose hope that another world is possible when only a few people show up for their meetings.

Obama does not promise solutions. He doesn’t view people as masses. Out of his experiences as a community organizer and his dialectical/historical appreciation of movement building in the , he is asking us to become active citizens, builders of a new that all of us will be proud to call our own.

"What we need in , especially in the African-American community, is a moral agenda that is tied to a concrete agenda for building and rebuilding our communities, We have moved beyond the clarion call stage needed during the civil rights movement. Now we must move into a building stage…

"We have no shortage of moral fervor, In every church on Sunday in the African-American community we have fervor. .But as soon as church lets out, the energy dissipates. The biggest failure of the civil rights movement was in failing to translate this moral fervor into creating lasting institutions and organizational structures…

“ ’s first African American mayor, Harold Washington was the best of the classic politicians, But he, like all politicians, was primarily interested in maintaining his power and working the levers of power. He was a classic charismatic leader,..

“For our agenda to work, we can't see voters or communities as consumers, as mere recipients or beneficiaries of this change. It's time for politicians and other leaders to see voters, residents or citizens as producers of this change. The thrust of our organizing must be the whole agenda of creating productive communities. That is where our future lies…

"The right wing talks about this but they keep appealing to that old individualistic bootstrap myth: get a job, get rich, and get out. Our goal must be to help people get a sense of building something larger…

"What if a politician were to see his job as that of an organizer, as part teacher and part advocate, one who does not sell voters short but who educates them about the real choices before them? As an elected public official, I could bring church and community leaders together easier than I could as a community organizer or lawyer. We would come together to form concrete economic development strategies, take advantage of existing laws and structures, and create bridges and bonds within all sectors of the community. We must form grass-root structures that would hold me and other elected officials more accountable for their actions…

"The right wing, the Christian right, has done a good job of building these organizations of accountability, much better than the left or progressive forces have. But it's always easier to organize around intolerance, narrow-mindedness, and false nostalgia. And they also have hijacked the higher moral ground with this language of family values and moral responsibility…

"Now we have to take these same values that are encouraged within our families--of looking out for one another, of sharing, of sacrificing for each other--and apply them to a larger society. Let's talk about creating a society, not just individual families, based on these values. Right now we have a society that talks about the irresponsibility of teens getting pregnant, not the irresponsibility of a society that fails to educate them to aspire for more."

That is what Detroit–City of Hope is about.

The Smiley West Undermining the President

The Video Collection: Including "Daddy Cool"

Ashford and Simpson: Solid as Barack

From Real News: The White Nationalism of West Virginia

Ebony: In Our LIfetime

The Next First Lady

Attacks from the Right

On the Campaign Trail 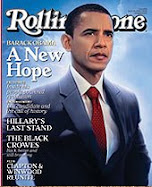 Mainstream Coverup? -- A Problem for Clinton

Barack on Being "out of touch": The Video

Cleo Fields: Putting it all in Perspective

Welcome to the Black and Progressive Sociologists for Obama Blog

RGN
Welcome to this blog on behalf of Black and Progressive Sociologists for Obama. The purpose of this blog is to serve as resource for our work, as sociologists, in promoting the Presidential campaign of Senator Barack Obama. Senator Obama represents a chance for a New America and New World. Rather than politics as usual, his candidacy is a political movement for change in America. His candidacy is in the ascendancy. He represents hope for the future. Personally, I am Robert Newby, Professor Emeritus Central Michigan. On behalf of this working group of black and progressive sociologists committed to the election of Senator Barack Obama for President, I am serving as editor of this blog. Feel free to submit or recommend relevant sources for the site. For more information on the working group and its signatories see the purpose at the end of the blog. Contact: rnewby07@charter.net. For information on the working group contact Donald Cunnigen at: donaldcunnigen@cox.net

Pennsylvanians Speak Out: Obama was Right!!!

Their Finest Hour: and Barack Rolls on

On the Tube in Pennsylvania

Barack on the Debate

Dan Charnas: White People, Get Over Yourselves

The Church Speaks: Voices from Trinity United Church of Christ

The Voters Obama and Wright

BLACK AND PROGRESSIVE SOCIOLOGISTS FOR OBAMA

The Black and Progressive Sociologists for Obama Working Group (Working Group) was established to support the Presidential Campaign of Barack Obama. The Working Group was conceived as an effort to provide support, albeit limited support, to the Obama Campaign. Given the demands of academic life and the limited resources of sociologists, the Working Group members hoped to provide support to the Obama Campaign through a variety of campaign activities that would offer assistance within the framework of their professional lives, such as, e-mail blasts, monetary contributions, and engaging colleagues and others in small social gatherings.

The Working Group has made contact with the Obama Campaign. The Black and Progressive Sociologists for Obama Working Group Blog has been established as a forum to discuss the campaign and efforts to promote the candidate.

The Formal Barack and Michelle

Barack and Michelle in Appreciation

Barack and Michelle at the Ball?

Barack and Michelle on the Stage 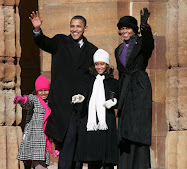 The Foursome in Springfield: Announcement Day 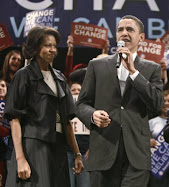 Michelle and Barack at the Rally

The Foursome and Barack's Distant Cousin